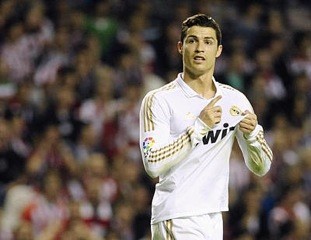 Widely acclaimed as the world’s greatest footballer of all time, Cristiano Ronaldo is clearly a winner.

Born on February 5th 1985, he started his life in a poor part of a small town in the Islands of Madeira, a self-managing region of Portugal, located in the North East of the Atlantic.

Cristiano Followed his passion and became better and better at what he knew he could do well. He practiced the key strengths of a winner. He says, ‘Your only competition is the person you were yesterday. Challenge yourself, not other’s’.

At the age of 12 in 1997 Cristiano was already making big impressions for his playing skills and his first contract was signed. He was required to move to Lisbon in Portugal for training with the Sporting Youth Academy. This was an early break in his career and an exciting time. At age 15, he was diagnosed with a racing heart which was corrected by surgery. Tragically, he suffered a serious blow when at age 20 his father died. The absence of his father was a great loss at such an early age.

At the young age of 16 Cristiano was a professional footballer. His successes since then are legendary.

Cristiano Ronaldo has shown great compassion for people who struggle or suffer loss. He understands what they are going through and has provided financial assistance to many families. He is an outstanding and inspiring role model and THE WINNERS CIRCLE is delighted to feature his pathway to success.

Known widely as CR7, his initials and jumper number, Cristiano believes in himself, overcame all obstacles and knows that success must be earned. This is obvious from some of his quotes:

Your love makes me strong. Your hate makes me unstoppable.

Never listen to the haters around you. Instead, take their hate as motivation and prove them wrong. The same fire which burns one can become the fuel for another.

I’m living a dream I never want to wake up from.

You have the ability to live your dreams. But you have to call the shots. Make a plan and take massive action. The future favors the relentless.

We don’t want to tell our dreams. We want to show them.

Don’t just talk about what you want to do. Go out and do it. People love the sound of their dreams and keep talking about them. But only those who work hard ever taste greatness.

I’ve never tried to hide the fact that it is my intention to become the best.

You don’t become the best overnight. You need to set powerful intentions every day, every month, every year, to go beyond your own reach and to grow to the next level.

If we can’t help our family, who are we going to help?

It’s good to desire success. But it’s equally important to care for your family. Without them, you won’t be where you are today.