Hugh Jackman, the Boy from Oz. 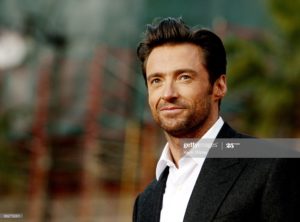 In considering role models who practice the disciplines, hard work and career successes that earn them respect from their fans, it is almost impossible to find one as impressive and dedicated as Hugh Jackman.

This outstanding Sydney born ‘Boy from Oz’, (a reference to his stage show on the late Peter Allen’s musical legacy), Hugh Jackman has a history of discipline and commitment that earns him the respect for always doing his best. His commendable career successes are evidence that effort and clear goals have resulted in Hugh becoming an international favourite.

Perhaps his following quote reveals the essence of his values.

‘To get down to it, respect motivates me, not success’

The first signs of Hugh’s talent started at Knox Grammar School in Sydney’s upper north Shore in 1985 when Hugh starred in the school production of ‘My Fair Lady’. He became School Captain in 1986 showing early signs of responsibility and leadership. He spent one year as a Physical Education teacher in a school in England and was 22 before he began to focus on converting his talent to a professional career in entertainment. He had become aware of his liking for acting which led to drama study at The Actors Centre in Sydney and a feeling of compatibility with the people he met at acting classes.

He once said; ‘I believe the more you do something, the less frightening it becomes, because you start to realize the outcome is not as important as you think’. This quote is interesting because it shows how he manages his challenges and fear of the outcome.

So many of us are afraid to try something different; something radical or risky, because we are afraid we will fail, so we never try. Hugh makes that observation about his career. This is a strong statement that leads us to why we need to learn from people who have conquered their fear of the unknown. So many people in history were adventurous and took risks in old wooden sailing boats for example as they explored the world taking their chances. Comfort zones might be secure, but they may also be limiting your ability to cross a line where you can be really good at something that reveals your skills or talent. You might be able to sing or play guitar, and as Hugh says; ‘The more you do it the less frightening it becomes’. This is because at each stage you get better and more confident at your chosen talent.

The list of productions, movies and stage shows that starred Hugh Jackman is extensive and impressive.

It was to be many years into his developing career that his global fame as ‘Wolverine’ was to ensure his future as a very popular and major box office success as a world class actor. His acting, singing and dancing talent was to be showcased in regular appearances on stages around the world and especially on New York City’s Broadway where he filled theaters with a growing legion of fans. The Jackman career is now well established and live shows around the world have kept Hugh very busy for much of his life as a hugely popular and diversely talented entertainer. Hugh Jackman sings, dances, plays guitar, piano and violin.

Hugh Jackman’s success is the result of perseverance and hard work, a commitment you will see as a common theme with almost every role model we feature in THE WINNERS CIRCLE.

Hugh has had a life filled with evidence of his determination and commitment to his career and family. He worked hard at what he loved to do and he represents the characteristics of a winner who practiced all the essential elements of success that THE WINNERS CIRCLE teaches and applauds.

Hugh Jackman has won an extensive list of major awards from his life of entertaining people, and yet he has remained grounded with no signs of the ‘diva’ ego that so many movie stars develop. He is devoted to being a good husband, father and family man who gains his respect and happiness from knowing that his behaviour as an individual delivers self-respect. There is no other way to get respect except to earn it.

Hugh Jackman’s commitment to fulfilling his dream has led to a life-time of self-esteem and happiness – He didn’t just get that fantastic feeling later in his life, he achieved it every day from a young age.

Hugh worked hard to create the things that make him happy and satisfied which is what we want for all winner’s circle members. He also assists other people to fulfill their dreams with his many financial donations to small scale entrepreneurs in developing countries.

Hugh Jackman is an inspiring role model, showing you that you too can have the life you seek and create. No one else except you can make the decisions and commitments you need to make you reach your goals in life.

Whatever your talent may be, focus on it, learn as much as you can from people who are good at what you want to do, get better at it, and draw your happiness and satisfaction in life from creating your self-respect. Close each day knowing that you took the necessary steps to being the best you can be. It will give you a powerful dose of satisfaction and happiness.

And, be patient as you build your dream, you won’t do it in one day. Hugh has been working on his success since he was 16. As Tony Robbins says in his teachings ‘Take one step at a time’. It is that first step that starts any journey.

Some inspiring lessons from Hugh Jackman:

On accepting responsibility: ‘There comes a certain point in life when you have to stop blaming other people for how you feel or the misfortunes in your life. You can’t go through life obsessing about what might have been’.

On commitment: ‘What I respect in myself and in others is the spirit of just doing it. For better or worse, it may work and it may not, but I’m going to go for it. Ultimately, I prefer to be respected for trying whether it works out or not, either winning or losing’.

On the most important reward for his life: ‘To get down to it, respect motivates me – not success’.

On respect for his father: ‘I’ve never heard my dad say a bad word about anybody. He always keeps his emotions in check and is a true gentleman. I was taught that losing it was indulgent – a selfish act.’

On his appreciation for his parents: ‘As you get older you have more respect and empathy for your parents. Now I have a great relationship with both of them’.

On perseverance and failure:  ‘If you accept the pain, it cannot hurt you’.

On practicing your talents:  ‘The definition of being good is being able to make it look easy’.

On love and family:  ‘When I come home, my daughter will run to the door and give me a big hug, and everything that’s happened that day just melts away’.

On never giving up:  ‘Nobody suddenly discovers anything. Things are made slowly and in pain’.