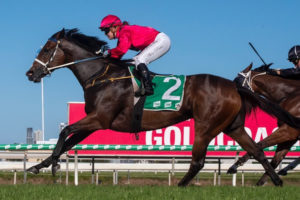 At an early age, a very young Alex Patis commenced a lifetime love affair with horses. From around age 3-4 she discovered she had a natural affinity with horses.

‘I started at Mudgeeraba Pony Club on the Gold Coast and progressed to jumping and cross country eventing throughout my teens’ Alex said.

‘I left school to become an apprentice Jockey in Melbourne to Brent Stanley at Cloud 9 thoroughbreds and at 17 I was accepted into Racing Victoria’s apprentice programme as the only female inductee for that year’ She added.

At age 17 Alex was seeing the early rewards for her dedication.

Looking back, it is clear that Alex discovered early in her life what she wanted to do, and by devoting all of her time to improving her skills she is now accepted as a successful and popular jockey having ridden 48 winners on horses that have won just under $1 million in prizemoney.

Alex has practiced what Michael Jordan and Anthony Robbins teach when they said ‘Take small steps’. Her career growth has been achieved in stages as she was learning her trade and improving her skills. 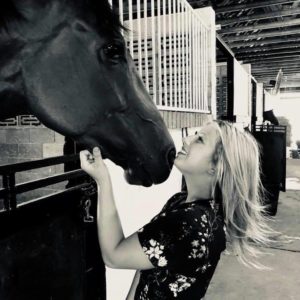 We asked Alex if the male jockeys accept females into what was for years a male dominated sport. She said ‘No, it isn’t a problem, the males accept us and there are a lot of girls riding around Australia now. I have found the male jockeys to have been supportive and helpful.’

‘Of course, racing is very competitive, and we all enjoy the competition which makes us all try harder’ Alex told us. ‘Jockeys get a fee for each race plus 5% of the prizemoney and that adds a strong incentive to win’ she added.

Alex’s drive comes from the same source we heard Cristiano Ronaldo tell us in his story – from a powerful need to be the best she can be. Her typical day starts at 4.00am for some track work and trial rides. Alex tells us that ‘Horses are prepared by staff who saddle them with appropriate gear for their exercise. Some can certainly get excited when I arrive for work, a bit like a friendly dog who knows it is about to get out for a run’.

Like many jobs there are risks in being a Jockey, but when you love going to work every day, the risks of putting yourself in a career you love are easily put aside.

Alex has been inspired by other jockeys as her role models and reflects. ‘Siggy Carr was a great and helpful influence in my time working in Tasmania. Linda Meech and Glenn Boss have also become strong influences and motivators for me’ She told us.

My career highlight was winning the apprentice premiership in Tasmania and also a Sunshine Coast win on a horse part owned by her Dad Rob Patis and Brent Stanley from Cloud 9 Thoroughbreds.

What next for Alex? Because winners never stop improving themselves Alex is currently fine tuning her learning and training in a 4 year apprentice programme run by Queensland Racing where Alex will improve her skills for media, financial planning, fitness – both physical and mental –  and a general education that will develop her and other Jockeys as athletes and individuals.

THE WINNERS CIRCLE teaches that coaching for success is a very necessary discipline that drives every winner toward peak performance.

Most of us don’t run into Jockeys socially very often, and, being a jockey has caused Alex to be of some interest at social gatherings. She says the most asked question is ‘have you ever ridden in the Melbourne Cup?’ Alex confidently replies, ‘not yet’. We can be sure that the Melbourne Cup is the pinnacle of every Jockeys career. From our experience talking with this delightful, dedicated, motivated and successful young lady we can only say that it won’t be long before Alex can answer the Melbourne Cup question in the affirmative. Alex Patis is already a winner – keep an eye out for her.